How does iBTC work?

In 1 sentence: iBTC is a synthetic BTC asset, backed by collateral, AND an IOU that allows any iBTC holder to claim Bitcoin at a 1:1 ratio.

In more detail: To the user, iBTC looks like any other wrapped BTC asset. You deposit your BTC to mint iBTC in a few simple steps. The core difference to the likes of wBTC, renBTC etc. is that BTC is secured by an open network of over-collateralized operators, so-called Vaults. It is best explained using the image below. 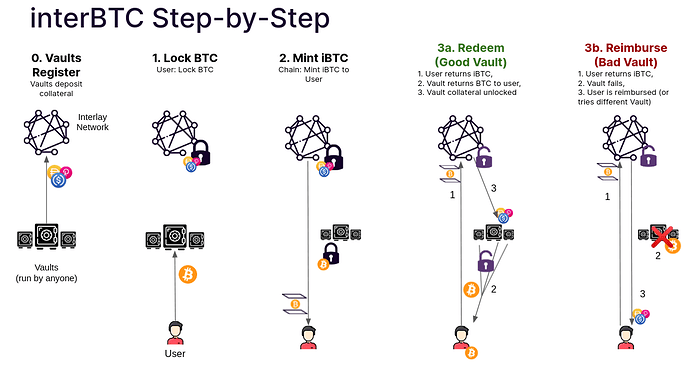 Bitcoin light client. Bitcoin transactions are verified by a Bitcoin light client, built into the Interlay parachain. This means: both user and Vault must prove that BTC was actually sent. This normally happens automatically (UI or Vault software).

Collateral. Supported collateral assets are white-listed by governance (setting a maximum cap and collateral thresholds). Like in MakerDAO, each Vault has exactly 1 collateral asset, while an operator can open multiple different Vaults. Currently, DOT is the only collateral asset. More assets will be added in the near future - the Interlay community is exploring liquid staking assets, USD stables, other wrapped BTC assets, etc.

Liquidations. Vaults positions are over-collateralized. Currently, DOT-iBTC Vaults require 260% collateral (thresholds set conservative for now). When collateral ratios drop, Vaults must top up collateral or self-redeem iBTC to rebalance their position. If the collateral ratio of a Vault drops too far, the position can be liquidated, just like in MakerDAO: anyone can burn iBTC for the collateral, at a premium rate. Before liquidations happen, Interlay incentivizes users to redeem against struggling Vaults for a 5% premium.

You can always check the Interlay Dashboard to inspect the system’s overall collateral health.

Why use iBTC on Moonwell?

Bitcoin is by far the largest asset in terms of market cap and trading volume. We have seen offer 400k BTC minted onto DeFi so far (albeit, 99.9% centralized). The main use case, as seen on Ethereum, is lending. BTC holders prefer low-risk yield by lending out BTC, or borrowing USD stables against their BTC (hold BTC but still use capital).

Why iBTC in particular?

IBTC is the most secure BTC bridge by design. However, we know that a protocol is only as secure as it’s code. This is why at Interlay we put special attention to security.

Bug bounties. Interlay has an open bug bounty on Immunify, with rewards of up to USD 1 million. ****

Path to IBTC on Moonwell

The ultimate goal is to enable one of the top DeFi use cases in the whole crypto space: borrowing USD stables against BTC.

The two main requirements for adding iBTC as collateral to Moonwell are:

Hence, we identify the following goals for Phase I:

We have already started building iBTC liquidity on Moonbeam. Currently, there are two pools on Moonbeam’s two largest DEXes:

As we push for deeper liquidity, treasury proposals to the Moonbeam grants program, as well as the Polkadot Treasury are being explored.

3) Enable iBTC Borrowing on Moonwell (TO DO)

As liquidity builds up, we will suggest enabling iBTC borrowing on Moonwell. Borrowing does not require deep liquidity or oracles and can hence be safely enabled early on - as a signal to BTC holders and Bitcoin-interested DeFi users to pay attention and start using Moonwell.

Once enough IBTC liquidity is available on Moonbeam, a governance proposal will be made to enable borrowing against iBTC.

We are calling both the Moonwell, Interlay, and overall Moonbeam & Polkadot communities to share thoughts and provide feedback on this proposal.

IBTC is the next generation of BTC on DeFi and - we believe - has the potential to attract a new wave of liquidity and users to Moonwell, Moonbeam, and the overall Polkadot ecosystem.

I will vote yes, if there is a proposal.

I only believe in native bridge in Dot ecosystem!

Like you mentioned, iBTC liquidity on Moobeam is quite low at this moment in time (12.6 xcIBTC). I would personally love to see that number continue to increase, but as it currently stands enabling collateral on this asset wouldn’t be safe.

I’d encourage you to give Gauntlet’s “Asset Listing Framework” proposal a read through. If passed, these will become the established guidelines for adding new markets/setting initial parameters (like collateral factor).

Below is an excerpt from their Asset Listing Framework which goes into detail regarding the levels of liquidity needed to safely enable CF on an asset:

Sufficient liquidity is required for an asset prior to enabling it as collateral. A cautious test of this is the combined slippage across all liquidity sources to measure how well a given asset can be absorbed into the market (a signal that may change upon asset listing).
We recommend that the combined (CEX + DEX) slippage be less than 5% for a sell order of either $300k or 10% of total asset supplied in Moonwell (whichever is greater) before enabling an asset as collateral. Gauntlet formulated this guideline by analyzing existing assets in Moonwell and their supplies. Then, Gauntlet modeled what the market could healthily absorb using our combined slippage model.

We all have a lot to learn! Thank you so much for your participation on the governance forum, it’s great to see!