For now, if we supply assets, we get $WELL apy. How about receiving debt partially with $WELL?

How about receiving debt partially with $WELL?

Could you be more specific about what you mean? You can always swap your WELL tokens on StellaSwap for some other token and repay part of your debt, or did you mean something else?

it’s like taking few percentage of borrowing interest with $WELL. Which could diversify $WELL utility and bring additional demand to $WELL.

any ideas are welcome.

i was trying to suggest that if we offer $WELL as a supply apy, we could take $WELL as burrow apy.

WELL is already rewarded to users supplying assets (GLMR, FRAX, xcDOT) to Moonwell money markets. Though Supply APY itself is denominated in the underlying asset that is being supplied, Supply Net APY includes both Supply APY + WELL/GLMR rewards (Distribution APY). 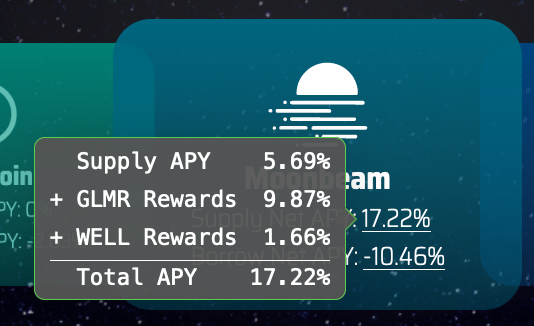 Borrow APY, like Supply APY, is denominated in the underlying asset. “Taking WELL as borrow APY” wouldn’t be technically possible unless the asset being borrowed was WELL itself.

i understand that $WELL included in supply APY is a reward which cannot occur at burrow APY. But taking borrowing interest partially with $WELL doesnt sound impossible. I dont suggest to reward borrowing ppl with $WELL, i am suggesting taking $WELL as a interest.

One of the issues with this idea is that holding WELL isn’t a prerequisite for borrowing assets on Moonwell. You can’t take WELL from a wallet that doesn’t hold any.

Also, WELL rewards can be enabled for borrowing as they are currently on Moonwell Apollo.

ppl may buy $WELL from the market as they do other interest assets. Thats the point of this suggestion. Some might sell their $WELL reward, while others buy it fror their interest.

Requiring WELL tokens to pay borrow interest could create unnecessary friction and make the platform less accessible to your average user (depending on how it’s accomplished). AFAIK, It would also be quite difficult to institute, mechanically speaking.

yeah i expected some side effects. I understand if it doesn’t fits.

It’s an interesting idea but it would require some very significant changes to the protocol and contracts to allow paying interest in WELL:

There might be a way to simply automate this using a tool like Gelato (live on Moonbeam) or OAK network (coming early next year) as a 2 step process.

could we have some back tests regarding this feature? if this feature becomes available, it would open up new supply and demand cycle for $WELL!!

I just wanted to bump this post to let people know that you have created a signal vote and voting is currently active. Though two days of voting remain, it currently appears to be on the path towards passage, so congratulations on that. If it does end up passing, it would be great to see some more community engagement/contributions here prior to MIP voting, so that this idea can be further developed and something actionable/executable can be put on-chain.

i agree there’s a need for more active discussion on this proposal. whether it passes or not i hope to discuss further.

thank u for bumping this article.

Hi @parkhodu.eth thanks for taking the time to put in a proposal!

Can you elaborate on the specifics of what you’re proposing? After reading your snapshot proposal and this thread I still don’t really understand exactly what’s proposed here, or how it would work mechanically.

Are you suggesting that as borrowers accrue debt, some portion of the debt is accrued in $WELL, and to unwind positions people need to also pay back $WELL in addition to their borrowed assets?

If that’s the proposal then (as @Luke mentioned) that will require quite a bit of engineering work to integrate directly into the protocol’s comptroller, and it also would need a thorough security review to be safely promoted to replace the existing comptroller.

If the idea is that any borrowers on the protocol need to repay in their borrowed asset AND $WELL, I think that’d have a negative effect overall on the protocol. In the short term it may cause buy side pressure on $WELL, but longer term it opens the landscape for a competitor that doesn’t do this, and if you’re an end user frankly the user experience wouldn’t be great (lots of confusion around why people can’t pay their loans back, larger players leaving the protocol due to this mechanism, lots of UX work to try to make it a good user experience, etc).

There’s also a significant challenge of pricing $WELL to even be able to assess its value in terms of paying back a user’s debt (if it’s integrated directly).

This might be better implemented as a “vault” or something on top of and integrating with Moonwell - if you were to build something like that you could market it as a sort of insurance product - imagine a product where users basically interact with the protocol as normal, but also open an approval to their $WELL or stella LP tokens for a new contract. If a user is within some % of being liquidated, the vault automatically withdraws some amount of well/LP tokens, market sells them, and calls repayBorrowBehalf on behalf of the user to re-capitalize them.

Unfortunately that doesn’t add buy-side pressure which seems like the presumed goal of this proposal, but the idea demonstrates the sorts of things that can be built independently of the core protocol to achieve things in a more frictionless way. IMO the point of being an open protocol is more or less that it does one core thing and does it well, and allows for people to build things that integrate directly with it.

That same vault concept can definitely be expanded on to do all sorts of neat and novel things and this is basically how things like yield optimizers work under the hood - they don’t make tweaks to the core protocol but instead build abstractions on top of existing protocols which is a lot easier to ultimately do IMO.

I give octavious right! Maybe big user would left

I like the other proposal, if you hold $Well gives you an APY boost…just very simple!

on borrowers perspective their wont be much to change. bcs what i propose is swaping few percent of “borrow interest” to $WELL. this is happening “after” user returns his borrowed asset and his interest. swap is happening on protocol side.

honor to see your recommandation, however, i m somewhat worried about it.
if WELL price rises, then the loan side will be discouraged and then be negtive effect to the platform.
if frequency of depaying rises, that will intensify the volatility and case some unnecessary gas comsumption.
personal view ,for consideration.